It was Holocaust Day and I was sitting in a synagogue listening to a speech by Alex Schlesinger – a wonderful presentation. He spoke of Sam who had recently died – a survivor of the Nazi death camps. Sam had hardly a night since the war without nightmares. His number-tattoo remained. Sam had spoken to Alex of seeing an elderly couple in a concentration camp, holding hands, looking at each other with mutual indulgence as they were shot and fell into a mass grave. “I was a witness”, he explained to Alex – the final weapon to be held against authoritarianism – witness. Now Sam had told the story to Alex he had made him a witness. Alex looked across the 200-odd people present – “and now you are witnesses”.

A November day – the season of fog. Dave and I are taking the train across the Black Country. We get out at a small station on the outskirts of Birmingham, walk towards a chosen pub. The fog is thick – one of those through which you walk as in a clear bubble through an eddying, viscous atmosphere. We walk through the quieted and empty terraced street, into a puddle of light from a street-lamp, and out of it again. Dave pauses. He noticed something. We walk back.

Standing just outside the pool of light enveloped by the viscosity is a figure with head bent forward under an old hat, dark glasses, a limp raincoat and a walking stick. A ‘hobo’? A misanthrope? A ‘tramp’?

But, no. Dave looks again. He sees something familiar, approaches. It is Rob Con, an admired student in Dave’s college of art. He is ‘being’ a tramp. It’s an exhibition. An art statement – it’s a performance. The street is echoingly empty of inhabitants. He can only barely be seen. There is no audience.

And that, it seems, is the point. Does the tree that falls in an empty wilderness make a sound? What do you call a performance with no audience? The intention is still there, the expression, a beginning and an end – it has substance. If art is about meaning, then is the witness-less performance without meaning? or does it, like the fallen tree, have latency? Is interpretation incipient – and still real? Does art have to be experienced?

Well, put that way, yes, of course – though the question is still worth asking. Why?

I am minded to be precise about this. Art of any kind is political – either conservative or, to some degree or another, iconoclastic, either admiring the authority of the canon, or a challenge to it. I can see no third way. Furthermore, the greater the art tends towards simplification the more likely it is to be conservative. Iconoclastic art inducts us into complexity. Revolutionary art that yells out radical imagery… 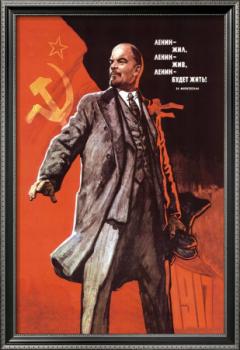 …is conservative in that it appeals to setting aside one’s critical judgement and to accepting the message as handed down, to replace judgement with compliance – a single narrative. Similarly with recent conceptual art that reduces complexity and imagination to a minimal insight that the droll is art and that art is droll:

Meanwhile, the forensic representation of a common object can be a fundamental attack on the notion of coherence and rationality that makes us question the status quo – and our commitment to it:

Here is a fine painting in the galleries of aviation art by Neil Hipkiss:

…and a counterpart by David Bent (the same ‘Dave’ as noticed Rob Con) who is currently the official artist for the Red Arrows:

Hipkiss seeks appreciation, to join him in nostalgic admiration, transferring the authority of the cultural/political canon onto canvas and then out to prevail over you, inviting your judgement to be funnelled into praise for the daredevil precision of flight. Dave’s painting frames the nostalgia and the authority and invites you in to engage with the complex world in which he positions it – a world in which butterflies wear RAF roundels. Both Hipkiss and Bent are political, each with their distinct leanings. But Dave’s is radical.

I notice recently that the politics of art in the UK has taken an energetic turn with renewed interest in David Hockney. Is this the fightback – finally – against BritArt and the ‘Young’ British Artists – Emin, McQueen, Hirst – the ‘Goldsmiths stable’. With Hockney, a return, not just of intensely figurative art, but of the anti-droll, complex, challenging and intellectual art. The art that requires you to uplift in order to engage – and which offers you an uplift to get you started.

To ask of Hockney’s Bigger Trees Near Water, ‘how did he do that?’ is of a different order from the same question asked of Damien Hirst’s Shark: 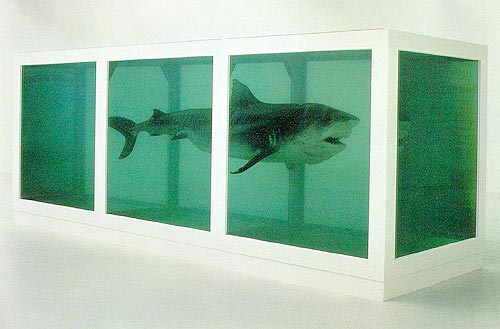 The first question is explorative, curious, experimental – looking for an ‘opening up’. It knows that the answer will merely raise further questions including ‘where’, ‘when’ and ‘why’. The latter (Hirst) question is looking for closure, is restricted to the technical. The veil that separates the looker from Hockney is thin and loosely woven – we can enter into it both in substance and execution. It has warm folds. That which separates us from Hirst is tough and thick and resistant. We admire the technical accomplishment and leave it at that. If we have other questions opened up they are as droll and obvious as Emin’s bed – can we cage-up our fears? what happens to humanity when we humiliate the most fearsome predator? Or perhaps it is simply a ‘fuck you’ statement ‘against nature’ (to borrow an apposite phrase).

But, for me, at least, the principal difference lies in the relation to he citizen and democracy. Hockney demands an audience – he achieves meaning through interaction – the work is incomplete without the ‘openings-up’ that will happen at the point of viewing. In doing so, Hockney submits his authority as a painter to the judgement of the viewer. It is essential democratic – it asks for interaction more than admiration. Inasmuch as any art is educational, this art and its invitation to engage gives us confidence to question authority, to see ourselves in some sort of symmetrical relationship with an authority which has o beg our indulgence.

Shark? Not so much. Someone describes to you having seen it – the eeriness of it, the dimensions of the shark, that it is suspended in a glass tank. You get the concept. Immediate audience it not a requirement. the authority of the artist remains intact and unchallenged (other than by those who simply dismiss it – but people dismiss Hockney, too). Hirst’s art is anti-democratic, as is Emin’s bed. Its educational message is that there are forms of expression with which you cannot engage argumentatively. Of course, he rhetoric is precisely the opposite – that centuries of artistic authority are being boldly challenged by raising the question, ‘is this art?’ – but this question is surely the drollest, most lowering aspect of the art form, and the subterfuge that hides real purpose and values. Damien Hirst famously plans his art in business models.

So, does art need an audience? Rob Con has at least two answers to the question he was posing. Which was just his intention. But the answers are not equivalent. One – the art that provides witness and makes you a witness – is pro-democratic citizenship, the other is….not. Art needs witness.