There are two things about golf that make it unique and compelling. One, is that you can generally tip up to the course Tiger Woods played yesterday to play on the same holes. The other, is that the handicap system allows you – me – to play competitively against Tiger Woods and beat him. It says, for example, ‘for Woods, this hole should take 4 shots; for Saville, it should take 6 shots’. If I make it in 5 and he in 4, I win.

General Election 2017. I was out door-stepping with Barry, my brother and Liverpool councillor, and with Stephen Twigg, MP. It was Stephen who had startlingly unseated Michael Portillo all those years ago, rescuing him from a life of political tedium and ineptitude for one of fickle talent and TV second-rank glamour. He (Stephen) should be emblematic of all election campaigns – flying the ‘yes we can’ flag. He always impresses with an air of straight decency and a Tigger-ish spring of optimism. A bit more of what the wineries call ‘body’ and he would satisfy me as a political leader.

But Labour wins in General Elections are seen as concessions of history. In fact, the common trope is that Labour rarely wins elections, Conservatives lose them. There is something of both here and now in 2017. I, along with many others, never once voted for Blair, but voted three times against the Conservatives, and something of this seems to be on the move here. A golfer would see the structural bias in constituency layouts that gift Labour around 25 seats as a reasonable handicap. It allows labour to compete with – and occasionally beat – the more serious players, on their turf. But as in my only-dreamed-of game with Tiger, modern Labour leaders generally tee-off an interview or a speech with an apologetic ‘oh – I’ll just fire off mine and then it’s all yours – ‘ – or else the more assertive, ‘I know I can, I’m sure I can, I’ll show I can – ‘.

Well, that’s not fair to Gordon Brown who has more body than the darkest Malbec. He would have – should have – intimidated the most robust of opponents.

But the point is that leaders matter, not in the way of Presidential campaigns, but because leaders are the sharpest expression of the Party’s culture. People can and should be swayed by leadership personalities, because that is where pretence fails and authentic values shine through. Oliver Sachs, in one of his books deals with Aphasia – brain disorders that strip away certain perceptual capabilities such as face-recognition. Sometimes, the Aphasia scrapes off veneers on perception that lays bare something more authentic. He recounts observing some elderly people with Aphasia watching Ronald Reagan give a speech. They were laughing, thinking that he was a comedian. They had lost the capacity to perceive artifice – they had ‘seen through him’. (Remember, the famous aphorism often wrongly attributed to Reagan, “it’s all about sincerity. If you can fake that you’re in!”).

But we seem to live under a wilful – well, induced – propensity to focus on the artifice and not on the underlying messages. It is staggering to think that David Cameron could be read as being ‘sincere’, much less ‘decent’ – his indecency was intensified by his panglossian insistences on the cruellest social policies. But it was the pan-gloss so many people saw. It is yet more staggering to imagine that Theresa May can be seen to be ‘serious’, ‘focused’, ‘an authentic politician’.  Again, we need the Aphasia to see the underlying incompetence, self-concern and authoritarianism that screams through the make-up. Thank heavens for Steve Bell’s and Martin Rowson’s cartoonish Aphasias: 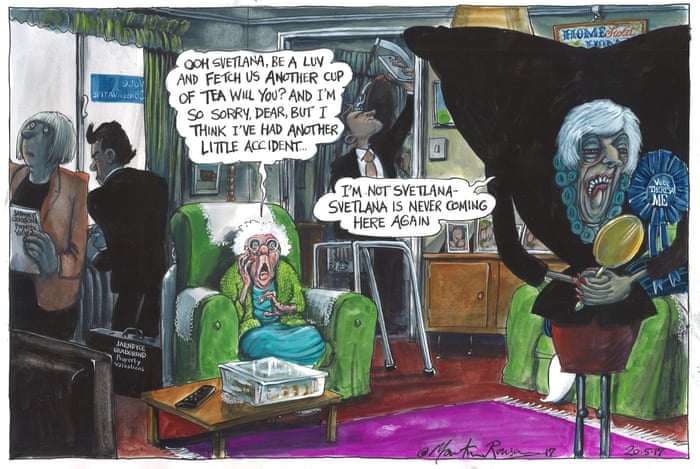 In all of these instances, we could take a clear-sighted view of Corbyn’s attributes and see in them leadership flaws in the conventional sense, but more importantly, see a political party that is taking on the honourable struggle to recast politics. Decency as a political value; control as dysfunctional; patriotism as more nuanced than jingoism; left-wing as a legitimate option to frame policy in confronting social change.

But here’s the rub. Conservatives have the license to artifice – insincerity is merely a margin of tolerance, Plato’s ‘honourable lie’ as told by the paternalistic philosopher-king. Labour, however, has to be flayed to raw flesh to expose insidious purpose. Policies that are responsive to social realities rather than economic theory are inherently mistrusted as capricious; caring about people is dangerously sentimental rather than instrumental; questioning the pre-existing order is seen as subversive rather than transformative – and. so. on.

Artifice is a shaky platform – firm as long as it lasts. The long, drawn-out, uphill slog that ended in a mercurial explosion of Joe McCarthy’s anti-communist witch-hunt in the United States ran headlong to a precipice. When counsel Joe Welch charged him,“Have you no sense of decency, sir. At long last” – McCarthy was caught in a Bugs Bunny moment, hovering over a cavernous drop with legs spinning. He fell.

On the door-step in Norris Green, Liverpool, a woman peers out from her frosted-glass front door. She is pleasant, generous with her time. She has, she says, always voted Labour – she is a Labour-person. But she cannot vote for Corbyn. Here is the pin-point leading edge of the political climate. Labour could/would win if only it had…..But she is hesitant. I get the feeling that she has to mouth this caveat in order to taste it, to rehearse it. It sounds infirm as a proposition. There is a precipice here for the Conservatives, and in their viciousness towards poor and vulnerable people, masked by an equal personal viciousness towards Jeremy Corbyn, they run headlong, lemming-like towards it. They may not reach it in time for the June vote.