If we could point to a single, identifiable source of economic and social development for what we currently call Europe it is surely Florence. It was here, over the 15th and 16th Centuries, that we saw giant leaps forward in humanism, science, business and banking, international trade, art and religion. This small city state under the Medici family drove European banking, developed the ledger system and double-entry book-keeping (not that this had not been discovered elsewhere); sponsored the development of sophisticated instrumentation and the expansive empirical scientific thinking that used it; it led to the explosion of artistic practices in fine art, poetry, and music that was the Renaissance and which provided the vehicle for the emergence of humanism, individual psychology and narrative methods. Florence was the effective Western end point of the Great Silk Road.

Well…not alone, for sure – but no other identifiable centre could lay claim to the enormous influence that city had on the development of Western culture and civilisation. It is worth noting – with apologies for the simplicity of the thought – that Italy lost this driving energy once it became a unified nation state and suppressed the ambitions of the Florentines, the Venetians and the Romans.

Which leads to my ‘wicked’ question: do nation states suppress the creative energies of their cities?

Devolution of any kind is not popular among national politicians. It erodes their centralised power and empowers populations who might well diverge from national political ideals. To take one, small example, OfSTED (inexplicably) has widespread support across political parties in Westminster – but their dominion stops at the devolved borders of Wales and Scotland who do not buy into the command-and-control ideology of Westminster.

The other principal reason for resistance to devolved powers is that it so often evokes the menace of populism and nationalism, both of which threaten to unleash unpredictable social and political outcomes. Look at Balkan conflicts between Serbs, Croats, Montenegrins and Kosovans, among others – all fuelled by devolution claims and resulting in ethnic cleansing and awful conflict. Now, in the UK, semi-devolved governments in Scotland, Wales and Northern Ireland are proving to be obstacles to already convoluted Brexit negotiations.

Where does it end? In England, Cornwall has a separatist movement (with its own language – though that has been declared ‘extinct’ by the United Nations), as does Yorkshire. Most countries in Europe have separatist movements – Catalunya and the Basque Country in Spain; the Flems and the Walloons in Belgium; The Crimea in the Ukraine and Chechnya in Russia. But look at Silesia and Kashubia in Poland; Bavaria and Schleswig-Holsteing among others in Germany; too many to count in Italy; and Frisians and Limburgish in the Netherlands. The historically stable nation states of Europe are, in fact, bustling market-places for political autonomy and a cacophony of voices shouting over each other for recognised identities.

The fact that nation states do not satisfy so many demands for political autonomy is largely down to the fact that historical boundaries around language, military and political groups do not coincide. National boundaries were drawn according to geopolitical ‘winners’ and ‘losers’ – not around cultural and linguistic realities. Take the Dutch language. It covers the Netherlands and half of Belgium – but then Belgium itself has a number of language groups squeezed in its single border: 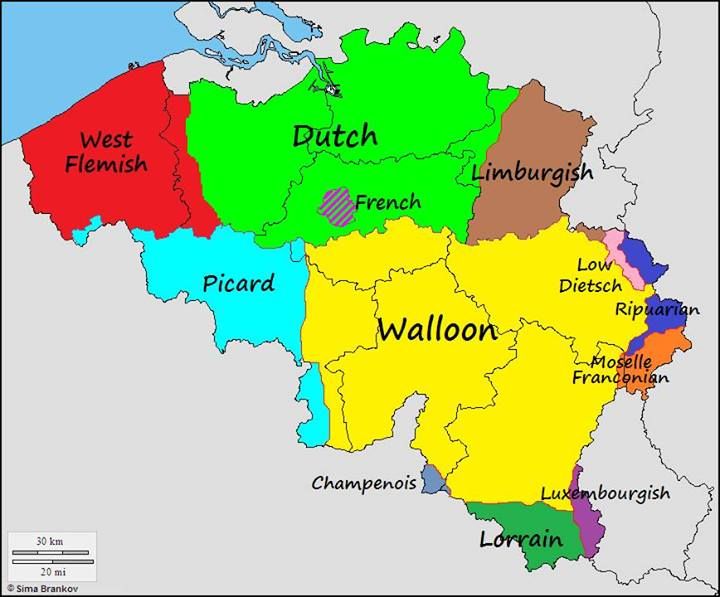 Although Poland is a pretty stable language area, it acknowledges 16 distinct language groups. The UK has 4 (including Welsh and Irish Celtic), Spain 5. These are not immigrant languages – these are languages of stable ethnic groups living within national borders, and often go along with ethnic identities which provide the basis of claims for devolved autonomy.

In the UK devolution has broadly followed language divisions along with strong ethnic identity (the Scots). But there remain arguments about economic devolution – i.e. to regions. Here, people seek a more fine-grained economic and social policy that more closely follows a regional identity. The social milieu and the needs of London and the South East is sufficiently distinct from, say, the Black Country or Merseyside as to call for some level of distinctive government.

The UK has often flirted with regional economic policy and, for sure, local government is precisely an expression of these devolutionary needs. Current Westminster government administrations, determined but embarrassed by the savage cuts of austerity, tried to ‘devolve’ the administration of cuts by slashing local government budgets by up to 50% (and more), leaving local councillors to soak up the outrage and the sheer pain. Now the plan is to cut local authorities free entirely by 2020 from central government funding, making them financially independent – thereby and finally shucking off many of central government’s moral obligations to its citizenry.

The  practical unfairness of this is obvious. Local authorities in London, the South East, and Bristol enjoy absurdly high property prices, relatively lower social need and concentrated support of financial institutions, and so can look forward to a strong tax base. Meanwhile, the Liverpools and the Newcastles face a very different situation. There will be arguments about this, heady winners, dismayed losers – injustice will prevail according to the dominant ideology in government – this is, after all, a democracy.

But at the heart of this lies the question, what do we make of GDP – the single measure of the economic wellbeing of our economy (society)? My previous Blog suggested that this is a measure with only a fragile grasp on lived realities. But what if GDP were measured as an aggregate of, say, metropolitan GDPs? Liverpool, to take a single example, has suffered among the heaviest burden of government cuts but is engaged in vigorous economic development with property prices rising just at the time when London property prices seem to be collapsing. While some other councils are still engaged in ‘outsourcing’, privatisation and cuts to public services, Liverpool is energetically pursuing ‘in-sourcing’ and resisting cuts to adult care and Children’s Centres, parks and libraries. A single measure of GDP is far too coarse-grained to pick up these realities – and yet, the realities are far closer to the lived experience of the citizenry. To make a caricature, we could have a failing national economy with a seething Florence (Liverpool) at its heart.

In terms of nation states, GDP conceals important insights into the creativity and energies dispersed among its locales. It suppresses useful political and economic argument about what makes for an appropriate unit of measurement. Increasingly, the role of a nation state is to co-ordinate and facilitate local enterprise, not to assume responsibility for all enterprise. Does this call for ‘smaller government’, as the alt-right and free-market conservatives like to argue? Quite possibly, at the National level – but not at all at the local level. If there is value to be found in replicating Florence across a country, looking for stimulation and creativity at the local rather than the unwieldy national level, then we have to strengthen local government and its interventionist powers. This speaks, yes indeed, of federated systems – but federated in the sense that local government administrations can seek out collaborations and pairings and build from the bottom-up, as it were – not to take a super-massive state and break it down into its assumed component parts.