So – Beyoncé is at it again! In a previous Blog she appears as the pregnant Madonna, sublimely unaware of the enormity of her self-regard. Or perhaps she is aware. For here she is again, adorned with twins, evoking the purity of Eve, and deftly avoiding subtlety and nuance:

Now. In this, Beyoncé merely follows in a long line of wealthy people using religious imagery to remind us (and themselves) of their power and prestige. The Medicis were past masters and mistresses of the art. Here is a Beyoncé, almost 500 years before Beyoncé – Catherine de Medici (this hangs in the Uffizi gallery):

The artist is contracted to use post-Renaissance visual references to create the association between the untouchable purity of the (apparently still virginal) Princess and that of the ‘true’ Madonna. This is almost an Annunciation scene (it’s a betrothal, actually). But it serves to remind us of the seamless connection between power, heavenly grace and the subjection of the ‘ordinary’ onlooker. The Ufizzi gallery currently enjoys around 1.5m visitors annually; Beyoncé has, it seems, had about 15m hits for her photograph on social media – so the two possibly compete in the public recognition stakes. Who knows whether Catherine’s voice was an asset.

There is a certain vulnerability, here. The brittleness of power, the self-awareness of stepping at a precipice created when unreasonable, and usually unwarranted authority is exercised in ways other than by muscle. In place of muscle there must be a binding agent to subject a people, and the unhealthy combination of religion and art provides just that – has done throughout the centuries. It is this sense of fragility that evokes our interest – what happens when we look through the thin veil that says ‘this person is worth more than another’ – when the truth is palpably different.

Cuzco in Peru was the centre of the Inca empire and seat of the Great Inca himself – el  ombligo del mundo, navel of the world. On a hill overlooking the city is the fortress of Sacsyhuaman, one of those places where archaeologists marvel at otherwise simply explained feats of stonemasonry in which 10 tonne slabs of stone are slotted together with cigarette-paper precision (ancient sone cutting techniques will be the subject of a future Blog – in preparation):

Now, in this place there is a stone circle at the edge of the hill directly overlooking Cuzco, some 300-400 feet below. This was, say the experts, the base of a tower from which the Inca would address the populace. Kind of like Beyoncé singing to her B’ees, perhaps – if that’s not too cheap a jab. Anyhow, the circle is said to have a special property – which I did experience. 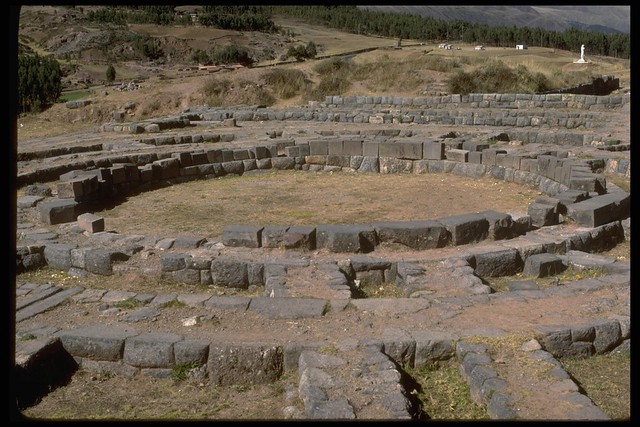 If you stand at the centre of the circle you hear a peculiar sound property. It’s like speaking inside a box – the echo coming back in at you. As I say, I did hear that. I have no – not even residual – paranormal beliefs, I am a materialist through-and-through – just don’t believe in supernatural or even metaphysical phenomena. But I did hear it.

What function did it serve?

The only explanation I come up with is that the Inca was so isolated by his individual power, so chronically astonished and so existentially nauseated by the reality of his god-like status that he suffered what today we would call panic-attacks. The extraordinary qualities of this circular tower were designed for him to hear the reassurance of his own voice. His echo was played back to him like a reverb effect in a recording studio. He was not alone – he was accompanied by…himself, the person, the man.

So terribly unreasonable is this kind of power that it constantly threatens to overwhelm in its grotesqueness. Caesar supposedly had a man alongside him in his chariot whispering, as he took in the adulations, ‘you are but a man’. With power comes vertigo. Even Hitler was a drug-addict (crystal-meth, actually).

So, reassurances come in all shapes and sizes. Beyoncé might have Jay-Ze cooing in her earpiece at concerts, ‘remember, honey, you are just a woman’. Unlikely, though necessary. In the absence of that, here she is going to the other extreme, casting herself in the image, appealing for affirmation. If you remember in Peter Pan, if the world did not reaffirm its belief in fairies, Tinkerbell’s light would dim.

There’s a political message in there. Donald Trump shines with the light of uncertain adulation, sustained by the affirmation of the populace, floating like the night-club entertainer on a waving sea of overhead hands. His approval ratings are important – perhaps more so than any recent US president. Because, like Tinkerbell, as the applause dies, so his substance dims. No less so than in Byoncé’s case.

But Beyoncé has her voice, and her creative capabilities. This is her real substance. The Medicis had policies for their subjects. That was their substance. Donald Trump has less real substance since he has no stable political core, no values commitments in respect of his obligations to the electorate – he seems to have shifting beliefs. Beyoncé can – should – rest her appeal and her claims on that creative substance, look for approval there and there alone. If the applause dies, it’s not because she is a diminishing virgin mother, but because there is a creative response to her audience that is lacking. If the Medicis were paranoiacally fearful of their lives no amount of divine appeal would alleviate that. More democratic, inclusive policies would. Retreat to the substance.

This was the discipline and the innovation that democracy brought to history. The Enlightenment gave us what the Renaissance missed – freedom from unwarranted authority. In the West, at least, we achieved, to some degree or another, a separation of church and State. We left behind metaphysical belief, a reliance on the supernatural. We could retain personal/collective religious beliefs, but that is quite separate from the way we relate to political authority. We have expectations of political authority – a democracy says that they are accountable to us. We look to the substance of our leaders, not to their divine attributes.

This is a fragile state of affairs – the allure of supernatural authority is always there and is a strong attractor. We feel a whiff of it when we dismiss politicians for the way they dress for talk or behave, notwithstanding that we may approve of their policies. An incredulous democratic citizenry still turns out to wave flags at ‘the queen’ – and we still have not found a way to liberate the parliamentary and judicial systems from royal (semi-divine) authority. Religious iconography is always there waiting to subvert democratic judgement. It only takes a Beyoncé to evoke it.